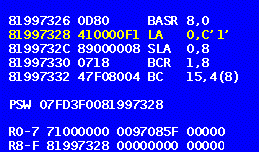 Last Tuesday, Feb 5, I presented at SHARE Winter 2013 in San Francisco, on z390, zCOBOL, zCICS, and the associated add-ons. This was my first time ever presenting at SHARE, or any user group at all. It was also my first attendance at a user group since, wow, 1989. (I am not counting my non-attendance at SHARE Summer 2012 in Anaheim, or the time I came down to SF to meet my boss at a Software AG user conference in the late 1990s.) it had been 18 months since Don Higgins presented on z390, and I thought that since SHARE was local, it would be a great opportunity to describe what is new, and what is coming.

I went in a bit nervous. The voice of my GA from my COMS 103 class at Sac State, Brie Adams, was whispering in my head on things not to do. I knew some friends of mine such as Ed Jaffe were attending. And then things got even more nervous. Not only was Mr. HLASM, Dr. John Ehrman, attending, but his successor. Sharuff Mousa (from Hursley) as well. And people I knew like Kristine Harper, and people I knew but had just finally met in person, like Rich Smrcina, Tom Conley, and Scott Fagen, were attending. And complete strangers as well. (I found out later that day that Mr. z/OS himself, Bob Rogers, wanted to attend but had a conflict. I think I would have died if he had made it.)

But onward I went. And I think I did pretty well. I handled questions, even having to answer some off the cuff. I made new contacts. I will admit that I haven't looked at the evaluations yet; I'm a bit scared to do so. And I probably was nervous some as well. Mary Anne Matyaz snapped a photo of me during my session, and my wife Cheri says I look nervous. I'm not surprised. (And having just looked again at the photo, I'm grabbing the chair.)

The rest of the day was a bit of a blur. Because of Mary Anne's gentle arm-twisting, I chaired a couple of sessions in the afternoon, and in one I finally met Kirk Wolf in person. Then I helped with some subterfuge and got my friend Chris Craddock (again, whom I had not met in person until he came to collect the badge) into the Expo. The next couple of hours were just tagging along with Chris and meeting even more folks whom I knew from the various mainframe-oriented mailing lists and Facebook. That evening was a CA-hosted party on the 45th floor, where I saw Meral Temel (sadly, I had no real chance to talk with her other than a quick "hello") and met Skip Robinson and Sam Knutson (again, finally in person!). And I'm sure I met a couple of others, and I apologize for forgetting already.

A big thanks to Crash Craddock for letting me crash at his place.

Unfortunately, unless the Braves are playing the Sox interleague that week, I won't be in Boston. But Winter 2014 is in Anaheim and I am already making plans. I hope to see you there!

My presentation can be downloaded from the SHARE web site (Session 12252), or if you are patient it can be loaded from the z390 or Cat Herder Software's web site later this week. (I will update with links when they are ready; I have to fix a couple of types I found.)

Welcome! Some changes have occurred with the z390 project since the last entry was published back in summer 2010. So here's what's happened since then.

The latest release of z390, including zCOBOL, zpar, zCICS, and other components was released in May of this year. You can download it here.

With the latest release, Don Higgins has retired from active management and participation, although he is still around to answer questions and give basic guidance. Taking over administration are Ray Mullins of Cat Herder Software, LLC (your author) and Abe Kornelis of Bixoft. Both have decades of experience with IBM z/Architecture assembler, with Ray's experience from the systems and internals side of z/OS, z/VSE,  z/VM, and BS2000/OSD, and Abe's experience from the applications side, primarily z/OS.

The other z390 developers remain, and a couple of more people have joined the ranks in several areas. However, we are always looking for more able bodies to help work on the RPI list, so please feel free to volunteer.

From a legal perspective, the copyright for the modules has been assigned to Cat Herder Software. This is purely for legal reasons, as Don is also dissolving his business entity this year. There are no plans to change the use of the GNU V2 Open-Source License.

As both Ray and Abe have other full-time responsibilities, there may sometimes be delays in responding to questions, support issues, or administrative issues. Please bear with them and feel free to raise severities as necessary. The z390/zCOBOL community is healthy, and others can step in to answer questions.

As part of the change in administration, Sourceforge, which was used as a secondary information site as well as the primary host of the product install images, is now the primary site for information about z390 and its components. The www.z390.org and www.zcobol.org URLs remain unchanged.

Work is in progress to transition the RPI lists (both archived and open) to Sourceforge Tracker databases (Bugs and Feature Enhancements). We expect this to be done by the end of December 2012.

The z390 and zCOBOL Yahoo! Groups remain unchanged, and should still be used as the primary support vehicle until further notice. An annoucement will be made when the Sourceforge Tracker database is online and becomes the primary tracking mechanism for bugs.

And, last but not least…

A big and hearty "thank you" goes out to Don Higgins, whose idea for emulating IBM's mainframe assembler goes back to 1980 and his original Macro Mini Systems' MMS/370 product that ran under CP/M 80 (Intel 8080 and Zilog Z80), which led to the mid-1980s PC/370 product on the IBM PC, which I myself used as a teaching aide during that decade.

It is our intent to keep z390 alive and available over the coming years. Sometimes there may be gaps in updates because we all have other priorities in life, but rest assured there are good things coming.
Posted by Unknown at 7:07 PM No comments:

z390 v1.5.01e now supports the creataion of alternate indexes using REPRO and also supports sequential access by alternate key via use of PATH defined in catalog. For more information visit www.z390.org.
Posted by Don Higgins at 3:17 PM No comments:

The latest update to z390 v1.5.01c now has new open source mainframe compatible sort utility which uses the familiar SORTIN, SORTOUT, and SYSIN control file with SORT FIELDS+(...) supporting 7 standard key field types. Sort work files SORTWK01 and SORTWK02 are dynamically allocated if needed for merge. Regression tests are included with new sort. A 1,000,000 records can be sorted in less than 30 seconds on a 3 GHZ Dell with Windows or Linux. For more information visit this page on the new sort:

With the release of z390 Portable Mainframe Assembler and zcobol Portable Mainframe COBOL PTF v1.5.01a, there is now a new utility named ZPARTRS which can be used to generate COBOL, Assembler and EXEC CICS source code execution traces. The utility is documented on www.zpar.org and there are 4 examples with PDF source code, traces, and screen captures for COBOL, Assembler, smf EXEC CICS source code transaction traces. The utility includes options for including or excluding selected modules from trace plus option for including detail execution trace showing values for instruction operands as well as source code labels and comments. There are also options to include or exclude time stamps, messages such as WTO, traces, or errors.


Here is the source only trace with COBOL line numbers:

And here is the CICS TN3270 screen capture for the executed transaction BEC1:

These and similar links for 3 othere demos can be found on www.zpar.org. The COBOL source and assembler type traces provide excellent learning tool to see what kind of mainframe z9/z10 assembler code is generated for a specific COBOL statement. For example the COBOL Hello World demo program consisting of DISPLAY 'Hellow World" and STOP RUN, generates exactly 5 assembler instructions in the procedure division as shown here:

Of course this does not inlude the 29 initialization instructions generated for every zcobol
program to load the zcobol runtime load module and verify version. Hee is alternative trace of the same COBOL program with DETAIL option which forces COBOL and assembler source plus execution detail line showing values of instruction operands for all instructions including the standard initializtion instructions which were skipped in prior trace:

z390 v1.5.01a PTF can be downloaded from www.z390.org with InstallShield for Windows and file image for Linux. This PTF has been regression tested on Windows Vista, XP, and Ubuntu 8.o4 LTS Linux. The pre-requisites are z390 v1.5.01 base install and J2SE 1.6+. For more details on the enhancements and fixes in this PTF visit:

A new z390 webpage www.z390.org/java has been published to display java version installed on Windows or Linux with any web browser.

z390 and zcobol full release v.1.5.01 is now available for download and install using InstallShield for Windows from www.z390.org. This release includes new Unicode codepage support for ASCII and EBCDIC codepages compatible with z/OS. The zcobol compiler now compiles 408 of the NIST COBOL 1985 COBOL test suite programs with no hard assembler errors and MNOTE level 8 messages for those features not yet supported. See the latest NIST test statistics here:

This release also includes zCICS v8 support which includes 13 EXEC CICS COBOL programs you can compile and execute on Windows or Linux using z390 and zcobol.